In our “The Measure of Measure” series, we interviewed castmembers of Measure for Measure about how they approached their characters in this challenging play. Our final interview addresses the play’s leading man, the “absent” Duke Vincentio. 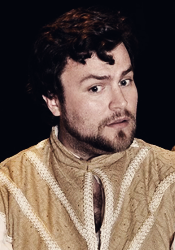 My name is John Moss and I am playing Duke Vincentio.  Commonly referred to only as the Duke, as he is one of those many characters in Shakespeare whose proper name is never spoken.  Coincidentally, this is the second time this has happened to me as I have previously played Oliver in As You Like It.

The Duke is motivated by a genuine desire to do good.  He feels responsible for the moral decline in his city after years of inattentive rule and later for the fates of those caught up in the subsequent crackdown of vice.  He recognizes that exterior forces are limited in their ability to enforce morality, so he instead uses subterfuge and misdirection to help his subjects re-establish their own moral codes.

The greatest challenge I had in crafting my performance of the Duke was addressing pre-conceived notions of the Duke based on production history or reverse engineering the character from the end of Act V as a protagonist in a “problem play”.  Often the Duke is portrayed as someone who likes being in disguise and enjoys setting up elaborate scenarios, but the text reveals a man who is doing these things for the first time in his life and is unsure that any of it is going to work.  He is not “the mad fantastical Duke of dark corners” as Lucio mis-identifies him, but someone on a journey out of self-impose seclusion into a world of fulfilling social interaction and obligation.

Also, with respect to possible spoilers, at the end of the play the Duke makes a surprising declaration (twice!) for which there is no definitive textual support.  Further complicating the matter, the character the declaration affects most has not textual or voiced response provided by Shakespeare.  I believe that audiences and readers sense the narrative friction of that moment and for many productions this moment ends up defining the character more than the rest of the play.  Briefly, I would say my greatest challenge is to have my character define that moment, instead of having that moment dictate my character.

Measure for Measure is often considered a problem play.  Not often taught in secondary school.  I work in a bookstore and I had to special order my copy because my store does not maintain a copy on the shelves.  So what is it that makes it a problem play?  Would Shakespeare’s audiences at the Globe or the Blackfriars considered it so?  What does it mean that after Angelo and Isabella’s final interaction in Act III, both characters are largely relegated to supporting statuses in the plot?

For me, it is almost as if Shakespeare is running as fast as he can from a scene that becomes too real.  What does it mean that the Duke’s lines at the conclusion of the play are fixed (the actor performing them must say them), but the actress playing Isabel (who has no lines in that moment) has a range of non-verbal responses she can choose?  Which character/performer really has more agency in that moment?

Finally, if Measure for Measure is indeed a problem play, is there an expectation that productions attempt to seek a solution or is the play best served by highlighting and exposing its flaws?