In our “The Measure of Measure” series, we interviewed castmembers of Measure for Measure about how they approached their characters in this challenging play. Our third interview explores the ever-loquacious Lucio. 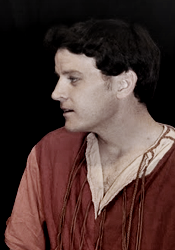 Will MacLeod, I play Lucio. Lucio is Claudio’s best friend and tries to get him released from prison by going to Claudio’s sister, Isabela.

I’ve done several Shakespeare plays before in both leading and supporting roles. I’ve been in mostly comedic shows, but also a few of the tragedies.

Lucio is described in the script as a “Fantastic,” but I think he’s more of an average. He’s the type that’s always up for a good night (or afternoon, or early morning) out on the town, but that’s somehow never around when the bill needs to be paid. He’s opportunistic, immoral, and sly, but always has an excuse ready when things go wrong. He also always has the best stories in any group of people, so that’s probably why they keep him around. He is loyal to his friends, however, and does what he can for Claudio when Claudio is arrested.

I think the key is to remember what Lucio’s ultimate goal is:  to keep having a good time.  Claudio’s arrest and Angelo’s rule of the city directly threaten this.  So, he’s not really a “good” character, but a character who’s aims happen to be served by helping the “good guys” in this particular situation.  He cares about Claudio going free not for any moral reason, but because Claudio is his friend, and his interactions with Isabella are motivated by this.  So, even in the more serious scenes, I’m trying to get across that Lucio is really trying to just get all of this over with so he can go back to having fun.

I like this play because it’s one of the more down-to-Earth Shakespeare plays. It deals mostly with “street” characters, not high-nobility, and it deals with some of the realities of everyday life (like sex and an unfair justice system) rather than high philosophical ideas or cliché romance. I think that helps the audience to identify more with the characters than they do in some other Shakespeare shows.