Assistant Director Stephanie Ramsey sat down with each member of the cast to ask them about their characters and their experiences working on the show. 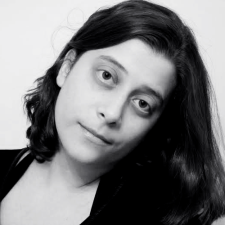 First up is the always-wonderful Relle Seidman, who plays the hero of our story!

SR: Tell me about your role in Julius Caesar RS: I am playing Marcus Junius Brutus, a man recruited by Cassius to kill Caesar and begin the revolution.

SR: How did you get involved in Britches and Hose?

RS: Well isn’t that a funny question!  I am the original founder of Britches and Hose which – I ‘m going to go ahead and give you a number here – I think it was 2010, and we started in my parents basement.  The first play we ever did was Antony and Cleopatra, which is interesting considering we are now doing Julius Caesar.  It was terrible, it was absolutely terrible – I mean the acting was good, but we had no props, we had no costumes, we had nothing, and we just had a really good time doing it.  And we had such a good time doing it that we decided to keep doing it for a much longer time.

SR: How has it been working on this production? RS: This group is great; I love these people.  These are fantastic actors – they’re very talented, they’re very inspiring.  I like working with a close-knit group of people.  To be fair, I have worked with all these people before, with the exception of your lovely self [the assistant director] and I adore them.  They are my theatre family.

SR: Why should everyone come see Julius Caesar?

RS: I’m sorry, I believe the appropriate question is why should you not come to see this production, because there are no reasons why you should not come see this production, and there are plenty of reasons why you should.  This is an ambitious production.  We’re doing some ambitious work here because we’re doing Julius Caesar, essentially in its entirety, with eight actors basically in rehearsal blacks.  We are focusing on performance.  We are focusing on character.  We are delving into the depths of the motivations, the conflicts behind these characters.  We are doing Julius Caesar in a way that forces you to look at what’s going on in the deeper parts of this play.  I think it’s a really interesting production, and, yeah, you should see it.